“The boat reacts to the ever changing wind, dancing its way from one wave to the next. And I, with her, advance in my journey.”

9.00am
I had another tough night with very little sleep. Strong winds forced us to roll up the Jib, take another reef off the mainsail and motor our way through the waves.

The captain jumped off his seat when the boom jibed violently. In the obscurity, surrounded by the deafening sound of the waves, I clumsily tried to help him. The boat was getting battered by the wind and even with the head lamps on it proved really hard to see in the almost complete darkness. With no idea of what the plan was and a nearly complete lack of communication, I tried to react the best I could to the orders the captain was barking at me. He literally shoved me away with his body and shouted at me a number of times, but I remained calm and did what I could. One thing I know for sure is that there is no need to add stress to a already stressful situation.
In any case, we managed to do what was necessary and once we got back to the main cabin, I asked the captain for a little debrief, eager to learn from my mistakes.
I do appreciate the opportunity to learn in critical situations (and the captain’s attempts to teach me), but something tells me that rehearsing manoeuvres during the day and in calmer sea condition would be less stressful for everyone.

9.30am
It is like trying to sleep in a bloody washing machine.

11.30am
The leak seems to have worsened. The guys took out over 15 buckets of water from the bilge in their cabin and that was after using the electric pump every hour throughout the night.
The captain woke me up and asked me to dismantle my entire cabin for good measure. Nothing relevant there.

We still don’t know how water is seeping through the hull and I am not sure what the plan is.
Ben and Estelle look completely exhausted.

1.15pm
I’m sitting in the cockpit, which on this 50 feet catamaran is set pretty high above the main cabin. 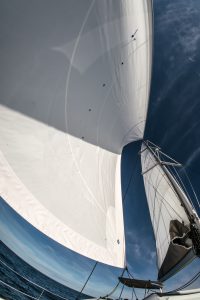 There is a good wind and the boat bounces vivacely over the waves. There is plenty of clouds in every direction I look but for the moment we are sailing through a wide patch of sun.
I soak up the light, the warmth, the breeze and the peculiar absence of any smell or red colours.
For the first time I feel comfortable here, on my own, surrounded by the ocean.
There is nothing boring about this. The mass of water around me feels alive, constantly moving in its infinite geometrical creation, not a single wave will ever look like another. A jealous sky paints countless clouds with a palette of blue and grey.
The boat reacts to the ever changing wind, dancing its way from one wave to the next. And I, with her, advance in my journey.

3.45pm
The day before we left La Rochelle, the technicians in charge of the final checkups found out the manual water pump was defective and replaced it with a new one.
Watching them doing their job reminded me of a scene from All is lost. I somehow had the feeling that I would end up having a close relationship with that pump.

And here I am, seven days later, pumping water out of the boat.
Yes, like a less attractive Robert Redford, I find myself at the back of the boat enjoying the repetitive movement of the manual pump.
At least we are not sinking. Yet.
Considering we dried the bilge less then four hours ago and it is now full of water again, I guess it would probably be a good idea to find out where the hell it is leaking from.

11.30am
I think I just managed to sleep 3.5 hours straight.
We are motoring into the wind and it is fairly choppy today. Everybody seems in a good mood though, which is very nice to see and be part of.
Tonight we should stop in Madeira. The weather forecast announces heavy rains and less than ideal conditions for the navigation. We are going to wait it off on the island for a couple of days before heading south to the Canaries. It is a very tentative plan for the moment as the weather seems very temperamental and keeps changing all the time. I guess we will play it by ear.

4.30pm
I helped the captain taking a couple of reefs off the main sail. The apparent wind touched 40knots.
I could see the bow raising and then plunging a good 4/5 meters while I was hanging on the side of the mast.

The simple fact that I can comfortably sit back and read a french sailing magazine tells me sea sickness is a distant memory.

6.00pm
It is not so much the taking off that bothers me, it’s the landing that tends to wakes me up.
I think I would be all right if I were strapped to the bed like an astronaut in space. I can sleep through the racket of the engine, the bangs of the waves on the hull, the light coming through the curtains, but when I find myself actually airborne…
Well it is going to be interesting to see how I will handle the shower later on (we are allowed showers because we will fill up the water tanks in Madeira).

8.30pm
As anticipated, trying to take a shower in a force 5 sea is a lot of fun.

10.30pm
This is getting pretty intense. The boat is alive with noises as we are rattled and shook through the waves. Every piece of furniture, every window creaks and squeaks while the structure of the boat bends and flexes under the power of the elements. Even the captain looks a little concerned and makes a number of “not so happy french captain” noises.

6.00am
Madeira is a stripe of yellow dots in the night, an interlude of Pointillism in the darkness of the landscape.

We should reach the port in a couple of hours. We were initially supposed to do all the necessary refilling (water, diesel, food) in Palma but we might do everything here while we wait for the weather to turn more clement.
We also need to have a routine check of the engine and find out the cause of the leak (which is not routine at all).
I look forward to not bouncing up and down while I try to get some sleep.

8.00am
It is still completely dark.

8.45am
Quinta do Lorde.
We are finally moored. The main sail wouldn’t drop. It really wasn’t fun.
The benefits of my shower are clearly gone.

1850 nautical miles and eight days later my feet are on land again.