“There is no doubt I am staring at the reddest moon I’ve ever seen. To its left the lighthouse of Isla La Malante adds an ominous touch to the scene.”

6.30pm
This is it. We are finally off. It is hard to believe this is really happening.

Getting here has been an emotional rollercoaster. Contrasting information coming from different players (all meaning well, no doubts), language barrier and general uncertainty about weather and schedule, all played a role.
But it worked out and that’s what counts the most. I am here now because of the kindness of strangers, friends of friends, the connections made on the road. I am here because I overcame the fear of asking, to myself first and to the people around me next.
I am here and this is exactly where I wanted to be: at the beginning of a new, exciting journey.

A twirl of different emotions grips my stomach: excitement for this long awaited adventure, doubts over how my relationship with a French speaking crew and captain might develop. There is also the fear of finally facing an environment (the sea) I am neither comfortable nor familiar with. This is a good thing though, because it will hopefully keep me vigil and it won’t let me underestimate the task ahead. I should embrace it and make sure it doesn’t slip into panic when things might go South.

Saudade, what a fitting name for the boat that is taking me away from familiar shores. Leaving family and friends behind is affecting me more than I though this time. Maybe it is because I will be a lot further apart and for a lot longer then I have ever been before, maybe because of the countless, difficult goodbyes I had to go through in the last few days.

Nonetheless this is the course I have set for myself and I am very happy to finally get started.

11pm
On my first night watch I lean over the back of the seat, on my knees, peering through the window. I am scanning the surface of the sea, partly to spot other vessels, but mainly because I need to look at the stars to keep the seasickness at bay. In this position I am pretty sure I look like a meerkat.

Time seems to have a different density at sea. It is maybe in relation to space, the way we move not in a straight line but in a constant tridimensional wavy pattern around an imaginary string.

2am
It will never be too soon when we finally switch the engines off, enough with the noise and the smell of diesel.
It doesn’t look like I will get much sleep.

4am
We are going a lot faster, I can tell even from my cabin as I lay on my bed. The tension in the boat, the nervous way it moves, the little noises in the structure. This is getting exciting.

It is a relief to be able to see the stars from my cabin, it allows me to get some visual reference of the movement for my brain to cope with the motion sickness.

5am
I had to let go. A short powerful burst overboard and at least it’s out of me. After hours of playing on the edge of seasickness and a little too much fiddling around in my cabin, I finally found my limit. It should get better from now on. 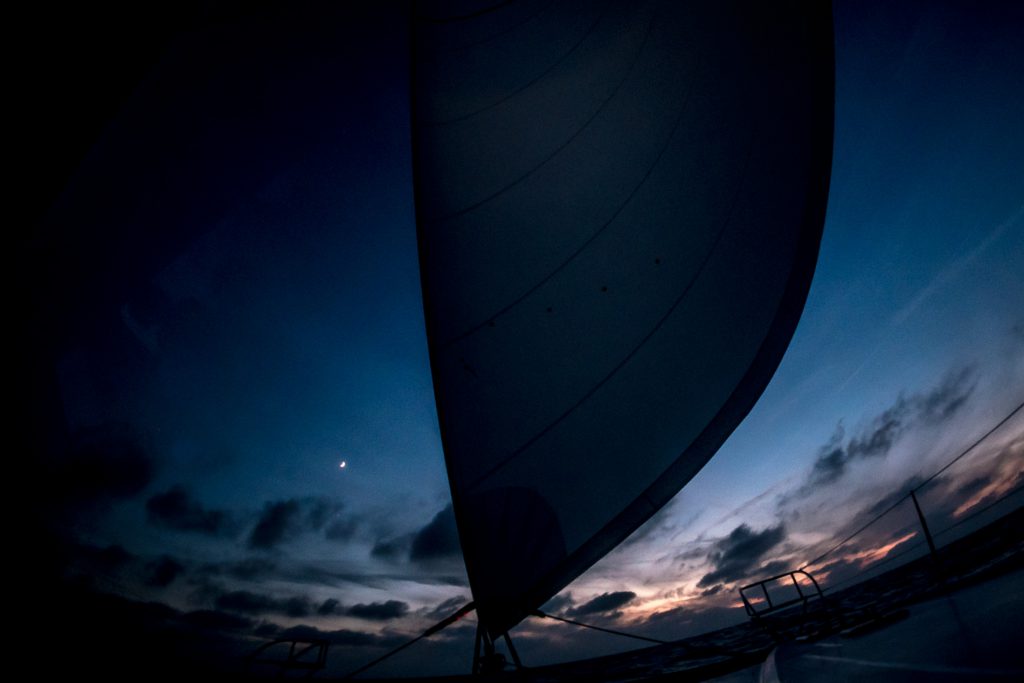 9pm
We finally cut the engines. We use the jib fairly loose almost like a spinnaker. The wind and the currents keep us on a relatively steady 8kt. The boat bounces on the waves, sometimes violently. Straight ahead we chase a dark orange blade of moon lying just above the horizon line. Lower and lower, she is now stuck in between the bow and the bottom of the jib.
A few moments later, “Elle sa tombe dans l’eau”, the top point of the blade stays afloat a little longer like a fire crying in the distance. And then she’s gone.

11.45pm
A vessel straight ahead of us. Roughly 15nm away keeps appearing and disappearing from the GPS map. There is a reason why we do night watches rather than just trust technology.

8.00am
A new morning brings a new country. Portside of the bow the tall cliffs of the Northern Spain make their first appearance.

Fishermen off the coast

12.30pm
We gently bounce on the waves, the sun is a white tongue over the water running from the coast to the other end of our field of view. A bunch of seagulls follows us close while we merrily eat a good meal cooked by the captain. We drink rum and wine, jazz plays on the radio, the breeze is crisp, the spirit high and on we sail.

3.20pm
The boat is gently rocking in the sun. I see the reflection of the rocky coast in the cabin window. I lie down and cuddle time in my thoughts.

4.30pm
We pass the beautiful Cabo Ortegal and its jagged magnificence. Os Tres Aguillóns pierce the sea in front of the cape pointing at a darkening sky. We are leaving La Baia de Biscay, the Atlantic Ocean restlessly awaits ahead of us.

5.15pm
The sun is slowly descending on top of the bow, the light is blinding and all colours are absorbed by a dark orange.

Blinding sunset over the sea

Magic sunset over the sea

11.30pm
There is no doubt I am staring at the reddest moon I’ve ever seen. To its left the lighthouse of Isla La Malante adds an ominous touch to the scene.

I cannot wait to see what new marvels tomorrow has in store.